Like it or not, children will grow up with all kinds of rashes. One day their skin would be baby smooth, and the next day it could be covered with some sort of rash, coupled with swelling and discharge thrown in to cause more worry.

But before you start panicking and calling your GP, not all rashes are harmful or contagious. Here are some of the most common rashes and skin problems explained:

Usually, baby acne tends to start on the cheeks, although sometimes they can also be found on the forehead, chin, and even the back of a newborn. They look like small white pimples that might look a little red as though they are inflamed. But don’t worry because baby acne is not contagious and a newborn may already have it at birth or develop them at a later time around 2 to 4 weeks of age.

If your child has caught chickenpox, they usually start on the scalp, face or torso first before spreading to the rest of the body. It is very contagious, and before there was the vaccine, parents would put siblings together in hopes that they would catch it earlier rather than later. Chickenpox looks like small red fluid-filled blisters on the skin that eventually dry into brown crusts or scabs. There might be a few at first, but more itchy blisters would emerge as it progresses. Some children can get as much as 500 blisters, although some might have just a few blisters together with a slight fever if they have taken the vaccine. But parents can breathe easy for a bit because it is extremely rare for children to contract chickenpox before their first birthday.

A very common sight in newborns is a cradle cap which looks like flaky, dry skin or yellow crusty patches on the scalp, around the ears, eyebrows, armpits, and in some cases, in neck creases. It might look like your newborn baby is suffering a severe case of dandruff, and while you might be tempted to scratch or peel the dry skin away, you really shouldn’t.

Instead, you can apply some oil in hopes to loosen or soften the skin and then wash it away with a gentle shampoo. Alternatively, you can also gently brush it off with a soft bristle hairbrush.

Even though it might look unsightly, there is no cause for worry as the cradle cap is not contagious and usually clears up in the first year.

Another common rash amongst babies is diaper rash or nappy rash. As the name suggests, the rash is usually found in the diaper area and skin folds. Depending on the severity, diaper rash looks like inflamed, red skin that could be flat or raised with tiny bumps and is most common in babies within their first year. When inflamed, it can cause a lot of discomfort for your baby. However, the rash is not contagious and should go away in a couple of days after treating it with nappy rash cream.

If the rash looks like small red bumps that may be pus-filled and don’t seem to be responding to treatments, then the diaper rash could be caused by a yeast infection. Just like regular diaper rash, a yeast diaper rash is not contagious and is more common in children who have recently taken antibiotics. Your local pharmacist or GP would prescribe some antifungal cream to treat the rash.

There is only one type of eczema that is hereditary although it can also be triggered by environmental and biological causes. They look like dry, thick, scaly, red skin or tiny red bumps that may ooze or crust and are usually very itchy. Eczema tends to run in families with a history of allergies or asthma and they typically show up within the first year of life.

Most children would outgrow eczema by the age of 2, but for some it may persist throughout adulthood. It typically appears in the creases of the elbows or knees. Sometimes it could be on the cheeks, chin, scalp, chest, and back. Because of the itch, children can sometimes scratch themselves raw. Although parents can only manage eczema with creams and by eliminating certain food, thankfully it is not contagious.

Another common rash in newborns is Erythema toxicum and they usually show up 2 – 5 days after birth or slightly later, if your baby is premature. The rash can appear anywhere on the body and you can distinguish them from their small yellow or white bumps surrounded by red skin. As scary as it looks, Erythema toxicum is actually not contagious and because the rash is not harmful and will go away on its own, no treatment is needed.

Hand, foot and mouth is another rash that we know all too well. They are blister-like sores that appear in the mouth, on the palms of hands and soles of feet. Sometimes, the rash can also be found on the buttocks. The flat looking red dots may seem small and harmless at first, but they may turn into bumps and painful blisters. They are most common amongst preschoolers although it can also happen to children of all ages, even adults. When an outbreak happens, the school will have to close for a couple of days to undergo a thorough cleaning as Hand, foot and mouth disease is contagious.

Hives is usually a result of the body’s reaction to certain allergens although sometimes it could happen for unknown reasons. They look like red bumps or welts on the body, face and hands and they are often very itchy. Hives usually come and go; lasting anywhere from a few hours to (at most) a couple of days although some may persist for weeks or even months. It can happen to anyone at any age and they are not contagious.

Unless they are causing extreme discomfort, hives are usually managed with the help of oral antihistamines which is safe for babies 6 months and above to adults. You can also use cool compresses to alleviate the itch or give younger babies a lukewarm oatmeal bath.

However you will need to keep an eye on hives that are accompanied by swelling around the mouth or lip area, since further swelling near their respiratory system could be a sign of anaphylaxis.

Both measles and German measles are contagious but extremely rare due to vaccinations so they are most likely to only hit unvaccinated children. However, between the two, measles can be live threatening compared to German measles which is milder.

You can tell that it is measles right away if there are red bumps and tiny white dots on the inside of the cheeks after a fever. Measles is also caused by a virus that specifically infect the respiratory system unlike, German Measles which invades the lymph nodes, eyes and skin. Both rashes would progressively spread to the rest of the body. A measles rash would last about 5 days before fading to a brownish colour, leaving skin dry and flaky.

German Measles on the other will last two to three days which could be accompanied by a mild fever, swollen lymph nodes behind the ears, runny or stuffy nose, headache, and sore throat.

Not to be confused with measles, Roseola also looks like pink rash on the torso and neck after a relatively high fever. The rash can last anywhere from 3 to 5 days which may later spread to arms, legs, and face. Depending on individuals, your baby might fuss and feel uncomfortable. It can also be accompanied by diarrhoea or vomiting and it is most common in children between 6 months and 3 years old. If you have more than one child you may need to isolate them as Roseola is contagious.

Milias are tiny white or yellow pearly bumps that are commonly found on the nose, chin or cheeks of a newborn. Other times, they can also appear on various parts of the body. They resemble white heads which might tempt you to scrape or pinch them out – and of course you mustn’t. Milia which is also known as milk spots or oil seeds are not contagious. They are also harmless, so no treatment is necessary. For newborns, they will go away on their own in a few weeks time but in the case of older children and adults, milias may take a few months time to disappear.

Scabies is very contagious and is caused by a tiny burrowing mite called Sarcoptes scabiei. These mites can live on a person for as long as one to two months burrowing and laying eggs in your skin. So even when the rash has crusted, a person can still spread the infestation easily both by direct skin-to-skin contact and by sharing daily items like clothing, bedding, and furniture until they are treated.

The rash look like scattered red bumps that are really itchy. They can be found in crevices like in between the fingers, in the armpits and diaper area. They can also be found around wrists, elbows as well as other areas including kneecaps, palms, soles, scalp and face. Scabies can happen to anyone  irregardless of age. Scabies may leave curvy white or thin red lines with small clusters of blisters on the affected area.The itching is most intense after a hot bath or at night which might cause your child to be irritable because he or she will be unable to sleep. Thankfully scabies can be treated by applying a medicated cream or lotion all over the body to kill the mites.

Most rashes are harmless and can be treated with creams or medication. But if your child is not responding to treatment, has rashes with persistent high temperatures, cold or cough symptoms, or is swollen around the lips, mouth and neck glands, you should seek immediate medical attention. 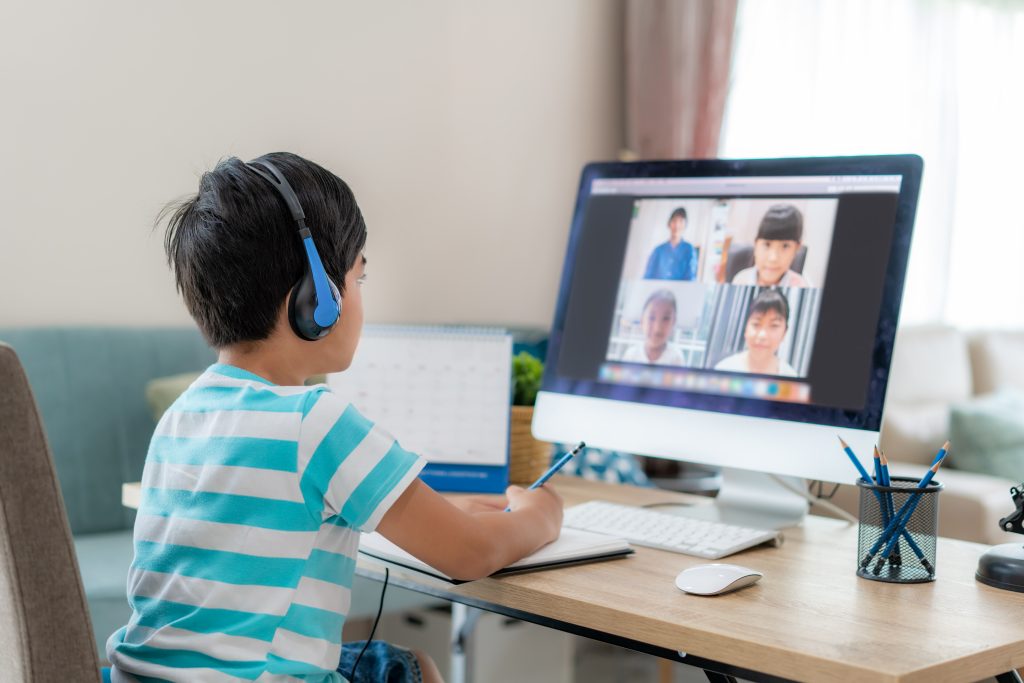 As children are forced to revert to online learning, parents need to be aware of how much more time children spend online. Without much else…

There are plenty of things that can cause a nappy rash. But the most common culprit that causes your newborn’s smooth skin to be replaced…